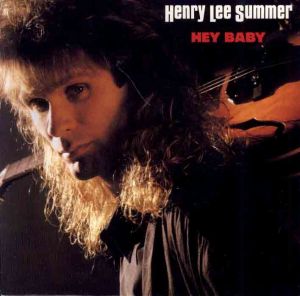 Oh, Henry Lee Summer, this is probably one of the most honest songs about men being men that you’re ever going to hear.  Oh, it doesn’t seem like there’s much going on in this great song, Henry Lee Summer, but as a fellow guy, I know the message you’re sendin’.  And that message is: it is unbelievably painful to say that you’re wrong.  By the end of the song, you sound like you’re in physical pain from singing, repeatedly, that you were wrong.  And clearly, based on the lyrics, you’re trying to get your lady friend back because you messed up big time.  Which sounds about right.  It usually does take an act of God, or at least an ultimatum of some kind before we’re going to admit we were wrong.  Well, I won’t speak on behalf of the entire male population, I’ll just speak for you and me, Henry Lee Summer, but I’m not going to lie.  I’m one stubborn bastard.

Oh, I’m pretty laid-back 90% of the time (even if I have low-level anxiety 99% of the time), but there’s 10% of the that I’m just a real dickhead.  Seriously, Henry Lee Summer, it’s unpleasant.  I get stubborn and mean and petty.  And most of the time when I get that way, it’s because I’m in a mess, and this is the only time I’m ever going to admit this, Henry Lee Summer, but it’s probably a mess that I created.  Which means that at some point I’m going to have to apologize for being wrong.

Is there anything worse than admitting you’re wrong, Henry Lee Summer?  Well, yeah, sure, but it’s still unbelievably blechy.  My wife and I don’t fight very often, Henry Lee Summer, but when we do, usually because of something I did or said, and it inevitably becomes clear that I was in the wrong. . .yuck.  I don’t even like thinking about it.  I’ve never been good at conflict resolution.  If you’ll remember when I called my truce with Bobby Brown, I talked about the fabulous explosions I’ve left behind in my wake when I’ve destroyed bridges.  I’m a master of the decades-long grudge.  I MIGHT forgive, but I definitely don’t forget.

Don’t get me wrong, Henry Lee Summer.  I’m really trying to work on that.  But I’ll tell you my m.o. when it comes to “apologizing”.  After my wife and I fight, usually right before bed because I want to read comic books and she wants to sleep (yeah, I’m five years old.  deal with it, Henry Lee Summer), I’ll lay there fuming for a good ten minutes, and in my head I’m like “That’s it!!!!  I’m sleeping in a separate room forevahhhhhh!!!!  I’ll help pay the mortgage and stuff, but we are SOOO DONE!”  Luckily, though, we’re both pretty co-dependent, so eventually I’ll call out into the dark, sarcastically, “So, you still mad at me?”  This may or may not lead to more fighting, depending on how fed up she is with me.  But at some point I will grudgingly admit that I’m wrong, and MAYBE I’ll say I’m sorry.  MAYBE.  Most of it is muttered under my breath so that even I won’t have to hear it, but it’s there.

I’m telling you, Henry Lee Summer, it’s physically painful to say “I’m sorry”.  It’s like there’s clamp in my brain and a snare in my gut that twists any time I’m close to saying it.  It’s illogical and against all reason, since I know I was clearly in the wrong and I absolutely know that sincerely saying “I’m sorry” will clear everything (mostly) up.  But it’s really goddamn hard.  Usually I have to say it sarcastically at least once before I can get the sincere one out.

I’ll tell you one thing, Henry Lee Summer.  There’s no way in hell I’d write a song about it.

So how was I to know

I didn’t even have a cluuuue

Just didn’t see it comin’, no
No
No

And I was such
A fool

How could I have been
So bliiind

Hey, I won’t turn my back
This
Tiiiime

Think I wanna wrap my lovin’ arms around you

I tried to hide my fear

I feel so weak
Insiiide

I turn my eyes
Away

My heart
Begins
To pooound

Lord, I have never felt
This
Waaaay

Stupidity put the blind on meeee

Gonna kiss and holja, baby
Just like I tolja baby
I got your lovin’ riiiiight

Stupidity put the blind on meee