Radio 79, side B, track 4: “Counting Blue Cars” by Dishwalla 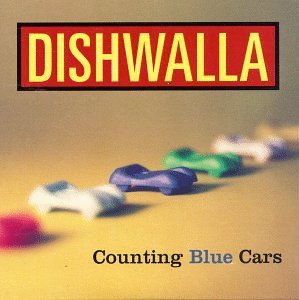 Oh, Dishwalla, I didn’t think I was going to have anything to write about this song other than that I thought it was pleasant and was a nice little nostalgic trip back to my early college days.  Which it is.  It’s one of those songs that was ubiquitous when it was released so that even though I don’t remember any particular instance of listening to it I know it inside and out.

But as I was listening to this one again after so many years, there was that line where you request all one’s thoughts on God because “I’m on my way to meet her”.  Wait, wha. . .?!?!?  Did you just call God a woman?!?!?  Mind.  Blown, Dishwalla.  When this song came out, I was probably wrapping up my freshman year of college, but other than discovering the wondrous effects of alcohol, my mind hadn’t been pushed very far outside of my little small town bubble.  This was probably one of my first real forays into ideas that were polar opposite from my beliefs at the time.  I was aware that there were other religions, sure, but at no point before I heard this song had I been presented with the opinion that God was anything other than the most alpha of alpha males.  I was giddily thrilled that this sacrilege got snuck into a song that was playing on the goldarn radio!

I’m sure since then I’ve had some pseudo-intellectual discussions on God’s gender and/or existence, most of them likely when I was more than half in the bag.  And I’m sure they were obnoxious as hell to listen to.  And for all I know, some of those discussions were ignited because we were listening to this song.  So for anyone who had to endure listening to such pablum coming from me, please direct all feedback to Dishwalla.